Lewisham local Rupert Evenett, awarded MBE for services to the community and education

Christ the King Sixth Forms’ Chair of Governors Rupert Evenett was awarded an MBE for his services to Education and to the community in the New Year’s honours list.

Lewisham and Greenwich local, Rupert Evenett has been Chair of Governors at Christ the King Catholic Sixth Forms since 2014.

Rupert was nominated by Christ the King Sixth Forms for his tireless work in harnessing the power of education to transform lives, making a real difference to the communities of Southeast London and Kent.  A former student of St Dunstan’s in Catford, Rupert was born and bred and still lives in South London, and is passionate about giving back to his local community.

Throughout his tenure as Chair of Governors, Rupert has been instrumental in steering Christ the King Sixth Forms, supporting the successful takeover of two failing schools, presiding over the significant expansion of Christ the King Sixth Forms, and ensuring strong curriculum offering benefits to its local communities.  As a passionate advocate for social justice, Rupert championed the introduction of the CTK Diversity and Inclusion Committee.  He has been a key driving force in implementing the Sixth Forms’ Social Mobility strategy.  Rupert has also led the Sixth Form’s Eco initiatives and the CTK pledge to become carbon neutral, striving to educate future generations through sustainability.

Rupert has spearheaded social action projects at Christ the King Sixth Forms, including employer partnerships, charity and community work. He initiated the implementation of the CTK ‘Acts of Charity’ volunteering scheme, resulting in CTK students giving more than 4,000 hours to charity and community work annually. His wealth of experience in business and social enterprise has driven the Local Partnership Boards at CTK, ensuring students have the opportunity to take part in employer led initiatives and unique mentoring opportunities from world class businesses.

“This is an honour for which I’m thrilled and grateful. And of course, it’s also a collective recognition of Christ the King Sixth Forms in its 30th anniversary year and of what everyone at Christ the King Sixth Forms has achieved. Over the last several years we have achieved change and growth for the benefit of the students and communities we serve – we’ve launched a high performing A Level college at CTK Aquinas Sixth Form in Brockley, we’ve launched a specialist Vocational and T Level sixth form, CTK Emmanuel, and offer both A Levels and Vocational education at our St Mary’s sixth form in Bexley.  I’m proud to be part of Christ the King Sixth Forms which has served young southeast Londoners so well for the last 30 years and will continue to do so for the next 30 years.”

“Rupert’s commitment to Christ the King is immeasurable, his drive to provide equity within the local community has transformed the lives of our students. He has presided over a time of great expansion for the sixth forms. The recent restructuring of the curriculum, ensures that young people in the area have unrivalled opportunities, including the chance to study at a selective A Level sixth form, and the widest range of T Level courses on offer in a Catholic Sixth Form environment. This gives local students in Southeast London and Sidcup a chance to flourish in their chosen programme of study and opens the doors for unlimited opportunities, regardless of their background or ability.  We are overjoyed to see his dedication rewarded with this honour.  It is hard to overstate the impact that his commitment has had. His vision, leadership, proactive approach and passion for inclusivity have benefited thousands of CTK students over the years”.

Rupert’s tireless work in the community, has also included support to a number of other organisations.  Including: Trustee and Treasurer of the Old Royal Naval College in Greenwich, Trustee of Alzheimer’s Research UK, Governor of Benenden School and chair of the John Wallis Academy, Member of Council of Goldsmiths, University of London and Chair of the National charity The Conservation Volunteers (TCV). 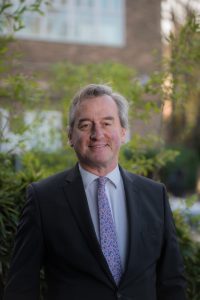